When Card Games can Script Your Superhero Movie 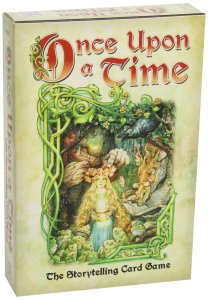 Okay, got that out of my system. Now on to other things like gaming and probably the shortest most mixed review of Avengers you’ll see on the ‘Net.

I finally got to break away from the keyboard and do geeky things. A few friends and I met up at our local game shop and played a new game, Kingsburg  followed by Once Upon a Time. I’ll get to the Avengers in a bit…

From one play through, I found Kingsburg to be a very well balanced game. Each player would construct buildings for their kingdom, working their way down tracks that included a religious track (golden idols, churches and cathedrals), a defensive track (guard towers, city walls, fortresses) and several others. 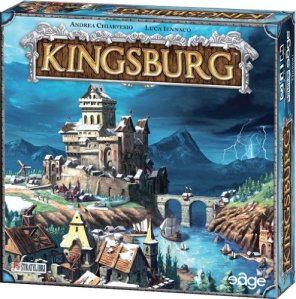 But winter was coming (five times…it had an amazing refactory period) and with winter, a mystery invader arrived.

The central mechanic was an action die pool where each player rolled three d6s and assigned one or more die to an action (which cost anywhere from 1 to 18.) Since only one player could select an action, and turn order was determined by lowest to highest cumulative roll, you had to plan your actions around other players’ dice rolls and strategies.

Collect resources, victory points, buy troops or even extra boosts for your roll – the actions presented allowed for any possible strategy. In the end, even with three new players, it was a tight game that came down to a single die roll to defeat an invading dragon.

Since we hadn’t closed down the game shop yet, we broke out a light storytelling card game, Once Upon a Time. The basic premise here is you are given a hand of storytelling cards which include places, characters, events, and things, along with one ending card. The point is to tell a story with your cards and work toward the ending you’re given. The catch? Everyone else is trying to do the same thing.

As a writer and practiced impromptu storyteller (through RPGs and such), I was amazed at exactly how utterly horrible I was at this game.

We went from a husband and wife to an adulteress and on to a talking platypus really quickly. Maybe too quickly. When the flaming sword of Talking Platypus Slaying came out, I was relieved, but somehow a giant, a cook, and dragon liver pâté got involved… I’m not even sure. Mostly, I was staring at my cards trying to figure out how to get in on the action. In fact, that seemed to be what happened much of the time – one person rambling on while everyone else was unsure how and when to jump in.

I tried to chase down online reviews and found the best to be a review played while intoxicated. So I have decided I will try this game again, but under the influence.

Finally, this weekend I saw Avengers, Age of Ultron, (sober) but everybody and their talking platypus is reviewing the movie, so I won’t say much other than it was pretty much what I expected – a fun superhero movie with some great CGI and some killer lines.

The movie plot started to resemble a round of Once Upon a Time beginning at about the halfway mark: a string of single story elements loosely connected by a chaotic banter-filled fight scene. Joss simply had way too many ends to tie, future movies to promote, and characters to introduce than anyone should ever try tackle in one flick.

There is only so much creative editing and sound swells can do to tell a story. At some point, you need to stop and expand on elements, but there were way too many to allow that to happen and someone was in a rush to get to their “end” card.

Even so, I enjoyed the movie for it’s Marvel fandom geek-out level, visual bad-assery, and flashes of Whedon genius. However it seemed to signal not the glorious beginning of a new and exciting story arc for the Marvel Universe, but the dense montages associated with the end of an era. Let’s hope I’m wrong.