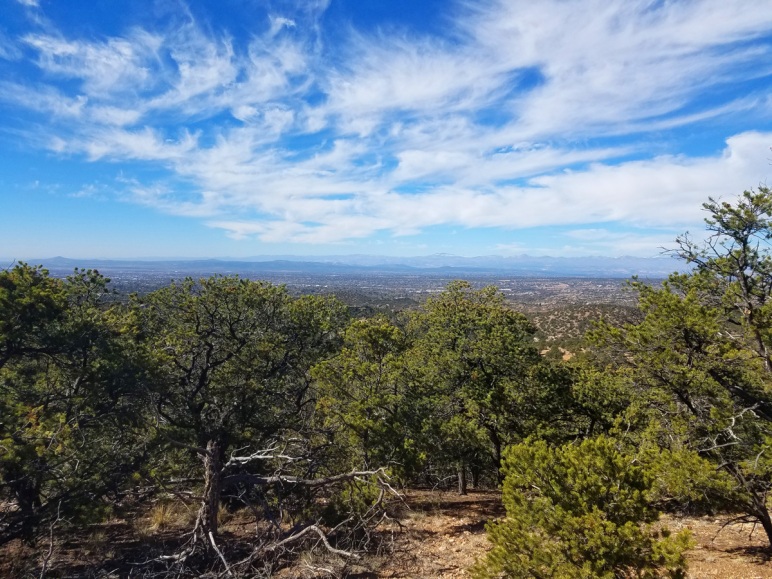 All photos by Russ Linton, licensed under CC BY 2.0.

The word to describe the Santa Fe landscape: tenacious.

The same sapphire birds hooded with onyx have shadowed us along our North to South trek from Montana down to New Mexico’s high deserts. Elusive, I haven’t grabbed a decent photo yet.

Duck Duck Go tells me they’re Steller’s Jays. These birds thrive in a narrow band along the Continental Divide from the sub alpine tundra in Alaska to the dry highlands of Mexico. Places where life might be thought to struggle.

Foraging in the wilderness, I’ve dined on blackberries from the rural wilderness of a wildlife refuge on the Eastern Shore of Virginia, blueberries clinging to Maine’s rocky coastal mountains, trailside strawberries and huckleberries in Glacier National Park, serviceberries and thimbleberries growing outside our RV window in the Flathead National Forest, pecans littering the creek banks of north Texas.

Now, I can add pine nuts off the scraggly pinyon trees in Santa Fe National Forest.

For my first excursion into the forest overlooking Santa Fe, I chose a hike starting from the desert foothills to the peak of Atalaya Mountain. Six miles, a 1500 foot altitude gain, it was a comfortable day trek under a gorgeous fall sky.

I couldn’t help comparing the trailhead arroyo to the landscape around one of our favorite desert stops. Lake Mead in Nevada is a gem of a lake carved from an unfinished realm, a deity’s workshop. Jumbles of rock and different colored stones littered the ground as if the divine hand couldn’t decide which one to pick. Among those rainbow hues had been a blocky pink stone.

On Atalaya mountain’s flanks, the divine landscaper had decided. Pink stone veined with glittering quartz was ubiquitous. It sparkled through the dirt, polished from the passage of time, scoured by a dusty wind, smoothed by the countless feet before mine.

Trade routes crossed the hills and passes, established in the 1800s. Pecos Trail. Santa Fe Trail. They connected the expanding, fledgling nation of the U.S. to a newly freed colony with ambitions of its own. Thousands of years before that, another people walked here. They’d found a way to thrive in the visibly harsh landscape, a land of hidden abundance.

Pinyons crowd the slopes, their pine cones loaded with vital nutrients. Often considered a subsistence food, not a staple, the nuts helped nourish the native pueblo communities. Even during a time of drought, these communities remained strong – strong enough to fight off the oppression of a colonizing force.

Taos Pueblo, north of here, has been settled for a thousand years. Eighteen more communities like it inhabit the state of New Mexico as sovereign nations. Their first revolt in 1680 helped secure independence and preserve their way of life for future generations.

The Spaniards would return and conquer the region through different tactics, but the early resistance assured the native people a certain level of autonomy. Under a restored Spanish dominion, they were granted land. Franciscan priests set aside their aggressive efforts to convert, leaving local rites and traditions intact. A fragile peace existed until “independence” came. Mexico declared itself free from their continental masters, soon to collide with another revolutionary society.

Nearly three hundred years after the pueblos first revolt which drove out the Spanish, President Nixon would restore a small portion of their ancestral lands.

The damage caused to the native population by the relentless expansion of Western powers should not be ignored. But the people thrived here for centuries before and may very well survive long after the next war, or revolution, or transfer of whatever tenuous and fleeting notion of power. Ascending the oddly parched yet verdant slopes, I understand why.

Life here does not surrender, it does not dominate. It takes whatever meager sustenance offered and continues. Picking a few pine nuts from a fallen cone, I continue the climb.

All photos by Russ Linton, licensed under CC BY 2.0.