A Review of Lev Grossman’s The Magician’s Land 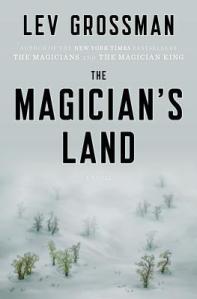 I’ve been reading a lot lately. Quite a bit of what I read is critique level reading. First or second draft type of things. It’s a hazard of being involved in a writer’s community and accepting their invaluable advice. A Faustian bargain of sorts. You read my shit, I’ll read yours.

I mention this because I’ve necessarily become more critical of what I read. And with that sharpening of skills, I feel like I can say that Grossman’s prose has matured tremendously in the time since Magicians was first published. I’ve always liked his style, but with The Magician’s Land, I found myself at times feeling inadequate as a writer. There are scenes here so poignant with such a great level of control over voice and description, I wanted to rewind things so I hadn’t read what I just read and I wouldn’t need to measure up.

Of course, I couldn’t turn back the clock (what a very Quentin Coldwater thing to want) so I just read faster. Or maybe devoured is the right word.

For anyone who criticizes this book due to “unlikeable characters”, you shouldn’t have ever gotten this far into the series. It is a central premise of the work that nearly every character is fundamentally flawed in some jarring, but distinctly human, way. Take that away and you gut the story along with the entire arc of the trilogy.

Yes, The Magician’s Land isn’t perfect. If you want to level a valid criticism, you could possibly argue that some of the plot developments felt almost like an apology for past wrongs which runs contrary to the strength of the series. Unrelenting. Cruel. Unashamed. Magicians has been all of these things as it deconstructs the lovable fantasy worlds we have grown to accept in our literature today. Never has it felt the need to loosen the screws.

Yet in the end, it does. And while it flew in the face of every vicious little treat I’ve gathered from the other books in the trilogy, somehow, I couldn’t think of the story ending any other way.

Like Loading...
‹ And the Winner is…
Why does Radiation, Ancient Sorcery, or Cosmic Rays cause an Increase in Bust Size? ›