Good Pulp in a Digital World 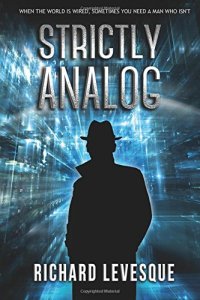 Let’s face it: there is a lot of self published material out there that should have never seen the light of day. Self-pub can be a digital slush pile where you, the reader, are expected to pan for the gold. But I think the gold rush mentality is changing. People are finding out that slapping a book together and posting it on Amazon isn’t a get rich quick scheme. Being an author is actual, honest to goodness work.

The book world is learning how to deal with the influx. Better review systems and policies are always being developed. Book services are popping up to connect readers with titles that fit their preferences and these services are getting more picky about which books they let through the gates.

And then there are sites like Immerse or Die, which are culling the herd with actual critical reviews of self-published books.

Submitting your book to Jefferson Smith takes some fortitude. The schtick is that he hops on his treadmill for his regular 40 minute jog and will read your book – for as long as it keeps him immersed. If you can write a book that keeps his mind off the physical drudgery, you’re in the winner’s circle. If you can’t? Well, after three “WTFs” he’s off the treadmill to write up a report about what went wrong.

His health is in your hands.

It’s a fun concept and he’s proven to be brutally honest. Not many books survive, though some do.

Thanks to Jefferson, I’ve expanded my own reading list and recently finished the hard boiled near-future sci-fi, Strictly Analog by Richard Levesque.

The story takes place in the city of Los Angeles at a time when the country has been torn apart by civil war and economic collapse. California, now led by an elected corporation, has seceded. Other states followed, inducing a full scale meltdown and border skirmishes between the states which an overstretched federal government could do little about. All of this intriguing world building is the backdrop for Private Investigator Ted Lomax’s tale of betrayal and conspiracy.

Ted has a disability – an interface problem if you will. He lost an eye in a firefight on the Las Vegas strip and has a handy, plastic replacement. This makes using the advanced ocular interfaces which the world now relies on for all of their social and entertainment needs a bit tricky. But Ted has turned this to his advantage and has shunned the tech to keep his business “strictly analog”.

The world building and premise for Levesque’s book are a solid hook. The writing, as I’ve learned that you can expect from all the books which survive Jefferson treadmill, is also well executed. Levesque successfully captures a neo-noir feel by updating the dark and shady alleys to the experience driven spaces of a world caught between pixels and pavement.

My one nitpick is that there was a tendency of the story to rely too heavily on exposition. In Levesque’s defense, this is a common feature of hard-boiled fiction. However, there were some key elements which I feel would have benefitted from a more direct treatment. The distancing didn’t maintain mystery as I think was the intention, but alternately telegraphed a few plot points and obscured key characters that begged for more screen time.

That small quibble aside, Strictly Analog was an entertaining read which I recommend for anyone looking for an inventive genre mash-up. World building was excellent, the futuristic tech was familiar in an “I could see this coming to a store near me” sort of way that heightened the near future feel. The story also gives enough of a hard-boiled vibe to provide an intriguing mystery and entertain without dipping too far into imitation. Job well done, nugget appraised – there be gold in them there Hollywood hills!