Home › Discovery › The Enemy Without…

Without so much as an echo on the scanners, neither the First Officer nor our Science Officer will offer their opinion on the ghost ship sighting. But I am certain enough that I am adding it here, to my own official records.

I don’t use a superstitious term such as “ghost ship” lightly. There are no known deep space phenomenon which could account for the strange apparition. However, as we now travel beyond the reaches of what is known, having seen a ghost could be as plausible as any other explanation.

As a security precaution, I have ordered Science Officer Alfie to keep an eye on the area and notify me of any change. He was happy to comply and established a perimeter around the site, linking each tree with a chemical barrier detectable only by his fellow Muttonians.

Days have passed without another sighting. Solar winds here can be brutal and we’ve been frequented by atmospheric precipitation. But the hull repairs have held and when the celestial storms clear, a golden landscape reveals itself which we are happy to explore.

With the clearing storms, the ghost ship returned. I’ve managed to capture an image from the aft array. Detailed analysis reveals the ship is indeed real. It is not a ghost nor is it a mirror reflection of our Discovery.

Those similar colors are not the same as I first thought. They form an inverse pattern of those on Discovery. We watched from the bridge as three crew members disembarked: a short, stocky man clad in camouflage, a woman with jet black hair, and a Muttonian, white furred with a long snout and pointed ears.

I’d heard of this only once before. An old smuggler’s ship which had purposefully skirted the edge of Federation Space to avoid inspection only to find they were being pursued by a ship similar to their own. Similar but really an exact opposite down to the atomic level.

Science Officer Alfie barked his agreement. His evil counterpart in the adjacent landing site took note and growled then quickly disrupted the security barrier with one of his own.

“What are you talking about?” asked the First Officer.

“Do a sweep. Look for any signals emanating from that ship. I want to know if they plan on interfering with our communications with Starfleet.”

“On it,” the First Officer mumbled as she sipped her coffee.

I could see she had no intention of following the order. Huddled around her steaming cup, her gaze lost in the distance, one thing became clear – she’d been entranced by Fall.

I looked to my Science Officer again for support and he sat, motionless, his ears perked. Several fluffy tailed vermin had descended from the trees and suddenly, he too could no longer function.

Across from us, the Muttonian grinned.

Then I understood. The entirety of Far Point Bronson was composed of anitmatter. It would explain how Fall could exist here. It could explain the appearance of our negative counterparts. And the sudden dereliction of duty by my crew.

We had to leave before it was too late…

Suddenly, I too began to feel the pull. A gentle breeze whispering through the trees and sending ripples over the far horizon. The procession of strange wildlife which appeared to ignore our very presence. If we sat still enough, we became invisible, just part of the scenery. Ghosts. Fading out of existence.

Our new arrivals weren’t the antimatter here, we were.

As I settled into my Captain’s chair, plans of a daring escape from Far Point Bronson began to slip from my mind.

(Here’s the link for Lake Bronson, Minnesota State Park Page to make reservations for your own adventures…) 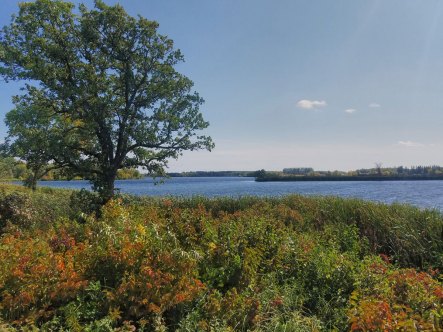