How can a powerless kid confront his father’s world of weaponized humans? 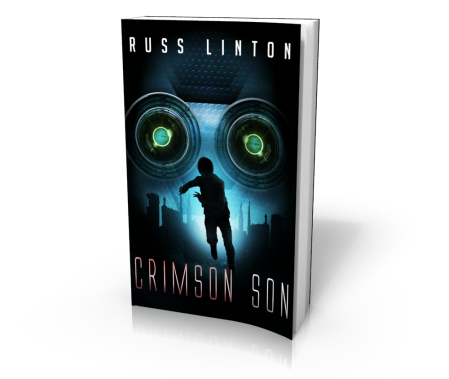 Nineteen-year-old Spencer Harrington is the son of the Crimson Mask, the world’s most powerful superhero. Since witnessing his mother’s abduction two years ago, he’s been confined to his father’s arctic bunker. When the “Icehole” comes under attack by a rampaging robot, Spencer is forced to launch into his father’s dangerous world of weaponized human beings known as Augments.

With no powers of his own save a multi-tool, a quick wit and a boatload of emotional trauma, Spencer seeks to uncover his mother’s fate and confront his absentee father. As he stumbles through a web of conspiracies and top secret facilities, he rallies a team of everyday people and cast-off Augments. But Spencer soon discovers that the Black Beetle isn’t his only enemy, nor his worst.

“Crimson Son is a strong, rite-of-passage piece, examining the bonds of father and son and the impact each can have on the other, set against the worlds of augmented super-beings and shadowy government conspiracies. It shouldn’t work as well as it does, but it does. In spades.”
– Fanboy Comics – 5 stars

Crimson Son is a 5-star book. Fast paced, engaging, character-driven, and a fun voice I love to read. As far as non-traditional Superhero books go, Crimson Son blows Steelheart out of the water.
– Laura Masiano – Hidden Corner of the Interwebz – 5 stars

“More than just a “superhero” novel, it has emotional subplots that touch on coming of age, seeing your parents as other adults, trusting friends, and the triumph of the human spirit. “
– Bookie Monster – 5 stars