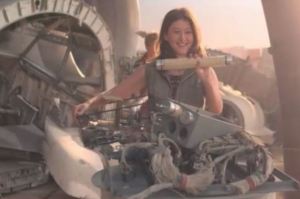 I’m continuing along my brave quest into recently discovered indie frontiers. I’m shamelessly following a path blazed by the Immerse or Die report over at Creativity Hacker. That path is littered with the husks of cast off self-pub works which strike the ground every eight minutes or so. Of about 150 books, only 17 have survived the full forty minutes and I’m sorting through those for the good stuff.

Jefferson can be a fierce critic and his method leaves very little time for a book to make an impression. Some might argue that he isn’t giving the books a chance, but I’d say his three strikes you’re out policy and the timed nature of the review replicate the tough task every writer has in gaining a new audience. Whether you’re shopping your work to an agent or whether you have sample chapters up at Amazon, what you say in those first few pages and how you say it is crucial.

My latest read was LK Rigel’s Space Junque. It made the IoD list with one kudo and only one WTF. That in itself is pretty impressive.

Space Junque is a genre-busting sci-fi, dystopian, apocalyptic, romance with supernatural shit goin’ down in the background. That alone as a one-liner and I’m all in. I enjoy genre mash-ups and unconventional works. The biggest problem is in the execution. You’ve got to keep all the disparate parts from looking like a pile of indiscriminate salvage.

Char Meadowlark, a hydroponics agronomist, is headed off on a vacation from the scarred, war-torn place that is Earth so she can visit her brother-in-law on an Imperial Space station orbiting the planet. The Defenders of Gaia, a group of ruthless ECO-Terrorists, seem to have other plans. She finds herself sucked into a conflict and falling for her getaway pilot, Jake. As the plot unfolds, she discovers there may be supernatural forces at work reshaping the Earth under a mysterious divine plan.

All the elements are there. And the copyediting is solid. The cover is actually pretty damn good as well. But I found the internal consistency to weld all these parts together severely lacking.

The romance starts as Char and Jake are fleeing a terrorist attack where they both witnessed one of Jake’s crew get brutally eviscerated by a bomb. As Jake straps her into a seat on the Space Junque (his ship and their means of escape) she has this sudden fear that he’s going to grope her.

Granted, prior to this, she states the horror of the events had her not thinking clearly. Her brain was muddled. Okay, I get it. Stress, PTSD, whatever. That might work. Except later on, Jake confirms he had urges at that moment. Post-evisceration gropage urges.

If that doesn’t earn a What. The. Fuck. I don’t know what should.

The biggest problem is that this isn’t the only time this sort of inconsistency happens. The action and our narrator’s attention span often skips around like a broken record. At the beginning, the main character is driving down a road and ghost heads are popping up like whack-a-mole in the fields and I have no clue what the hell these ghosts are. With the crazy genre mash-up, I’m going to Philip K. Dick acid-town in my head. But later we discover that “ghosts” are just slightly mutated people with a bad rap.

Okay…but why do they pop up in fields along the Interstate?

Other times, the romance feels forced and at equally inappropriate points in the story – like when Char and her brother-in-law (very shortly after she believes Jake has died) are lying low, watching as terrorists initiate the apocalypse. This girl has some bizarre fetishes.

The same disjointed storytelling and character motivation leads to several of the main plot twists falling flat. There’s one about giant birds that feels pretty consistent, but inconsequential, and the rest sort of drop in from planet ten.

I don’t want to say Space Junque is, well, junk. It isn’t. The insane genre mash-ups and a sort of Firefly feel to the crew and space ship adds a coolness factor (though one of the chapter titles is wholesale lifted from a Firefly episode title – which isn’t so shiny).  I only wish finding the synchronizers wasn’t such a tough job.