Behind the Black Wall – Guest Post with Laura Maisano

Thanks to everyone for their wonderful response and participation in the Immerse or Die Bundle Giveaway. The lucky winner has been notified! Now, on to my special guest for the day, Laura Maisano – a super talented editor and writer I met at a local writing group and then convinced to join yet another group so she could pick apart my stuff there too. It’s like I have a personal traveling editor! Woot! (shhhh, she doesn’t know):

Laura has her own giveaway going on over at – Rafflecopter for a $10 Amazon Gift Card! Check it out!

Guest Post: Behind the Black Wall – Gabe’s struggle with identity

Thank you for hosting me on your blog today! I’m so thrilled SCHISM is coming to life for everyone to read, and so I thought I’d share a little about my main character, Gabe Jones, and his struggles with identity in the book.

The story begins where Gabe has had amnesia for roughly nine months. He’s a little angsty about it, because he feels he doesn’t know “who he is.” Without his past experiences, how can he know how he feels about things or people, whether he likes certain foods, or what he believes? So, he’s motivated to recover his memory to reclaim his identity.

However, nothing is that simple. The other main character, Lea, helps Gabe to see that he’s still a person even without his memory. He makes choices, feels, has opinions on things. He can choose to be who he wants, regardless of who he was in the past. And Gabe takes her advice. He moves on from wandering around wishing to be someone, to living in his new life.

One would think Gabe’s struggle with identity ends here, because it should. Though eventually Gabe does recover his memory, and he’s changed from the person he remembers. But he’s still that other person, too, right? How much of our true selves is something ingrained (nature) and how much is formed from what we learn and experience (nurture)? Gabe discovers it’s a mix, and though he chooses to change, there are parts of him that never will.

I hope this exploration of some of Gabe’s motivations helps you enjoy SCHISM on a different level. Thanks again for allowing me to share more about my characters. You can find me on the internet in the following places: 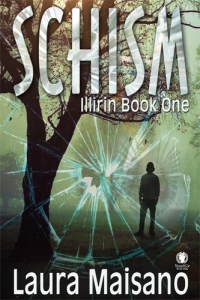 Art therapy hasn’t done squat for Gabe Jones. A thousand sketches of his fiancée can’t bring his memory, or her, back to him. Nothing on Earth can. His past lies in another dimension, a world just out of sight.

Another student on campus, Lea Huckley, unknowingly shares Gabe’s obsession with the fourth dimension. The monsters from the other side attacked her parents and fled, getting her folks locked up in the loony bin. Proving this other world exists is the only way to free them. Lea and Gabe strike a deal to help each other, and together they manage to open a door to the world of Gabe’s true origin. She’d use him for proof—if she didn’t already care too much.

While Gabe tries to reconcile his feelings for Lea and his rediscovered memories of his fiancée, a much more sinister plot unravels. He uncovers his history just in time to become the unwilling lynchpin in a conspiracy to start a war. His memory holds the secret to the final riddle the would-be conqueror needs to get the upper hand. Gabe must protect the riddle at all costs, even if that means leaving Earth, and Lea, behind forever.

Excerpt
Lea packed light. Other than her phone’s GPS and a flashlight, she kept a small notepad, her lucky pencil, and the thermometer in her cargo pocket. She didn’t need to find data, now she needed proof.

She led the way down the alley where skyscrapers blocked the glowing moon and the lamps from the highway. Yellowed fixtures above each back entrance threw faint cones of light onto the cement, like holes in Swiss cheese.

Lea checked the coordinates on her phone while she walked, and the little red arrow crept closer to the flag icon she placed to mark the interaction point.

Gabe spent his time surveying the area for anything that might be a danger. He kept fidgeting behind her and turning around every few seconds, a twitchy meerkat on patrol.

“We’re only between buildings. It’s not the end of the world.” Lea checked her phone again to make sure they were headed in the right direction.

He glanced over his shoulder. “I still don’t like it. It’s night, people do get mugged, you know.”

“The statistics of that are so low. We’re really not in any danger, considering the population and how many times that sorta thing happens.”

He shifted uneasily behind her. “Whatever, we’re raising the chances by being out here at night.”

Lea rolled her eyes. “I’m not missing this opportunity.”

They came to a cross section behind two major offices where the loading docks and dumpsters sat for both of them. A stream of water trickled down the concave cement into the large sewer grate. Old garbage left a fume hanging around, and the humidity only made it worse.

Lea double- and triple-checked her coordinates, cross-checking with her notes. “This is it. Within I’d say, a fifteen foot diameter, low to the ground.” She shoved the phone in her cargo pocket. “Perfect.”

Ten minutes may as well have been six hours. She paced back and forth, her sneakers scuffing the gritty pavement.

Gabe continued to keep a watchful eye out for muggers or vagrants. What a dork.

She snickered quietly. For someone who didn’t know his own experiences, he sure seemed paranoid. She watched him standing straight, darting his eyes to the entrance and even up to the windows above them. Watch out bad guys, Gabe’s on to you. She smiled and turned to see what looked like heat waves rising from the cold cement. Crap. The interaction had already started.

“Gabe…” She waved him over next to the loading dock.

This interaction provided no shining lights or obvious movement. Not much stood out visually, except maybe the air glistening like summer heat waves if she squinted hard enough, but her digital thermometer found the coldest point.

“Here,” she whispered, not wanting anyone or anything on the other side to hear. She stretched her arms forward, and Gabe did likewise.

“On the count of three.” She waited for him to nod. “One…two…three.”

They both reached through the interaction point and grabbed at the thicker air. Nothing. They tried again, pulling, grasping, and making any sort of motion to trigger a rip. Finally, Gabe leaned in and pulled out at just the right angle, because the light tore across like a jagged line. Lea grabbed the edge of it and tugged, opening the tear wider until they both fell through.

Laura has an MA in Technical writing and is a Senior Editor at Anaiah Press for their YA/NA Christian Fiction. She’s excited to release her debut YA Urban Fantasy SCHISM, and she’s finishing up the sequel UNITY.

Her gamer husband and amazing daughter give support and inspiration every day. Their cats, Talyn and Moya, provide entertainment through living room battles and phantom-dust-mote hunting. Somehow, they all manage to survive living in Texas where it is hotter than any human being should have to endure. Check out her blog at LauraMaisano.blogspot.com.

Like Loading...
‹ Name Your Price for Award Winning Books? How About FREE!
Borrowing Time from an Alternate Dimension ›