Pilgrim of the Storm Limited Release 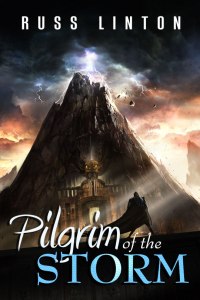 Only in the indie world can you go from a week between the cover reveal and a release.  Sometimes this is a sign of poor planning or poor production values. Let me assure you, neither applies here. (Just look at that gorgeous cover! And Heather, my editor, wouldn’t let me stuff that amazing spine full of misplaced commas and other bullshit as much as I tried…) Yes, this approach flies in the face of conventional wisdom but as a self publisher, I reserve the right to experiment.

Today marks a limited release for Pilgrim of the Storm. It will be available on Nook, iBooks and a few other select retailers with a pre-order set up at Amazon.

I should probably explain.

The vast majority of my sales come from Amazon. For that reason, I like Amazon. They are incredibly friendly to self publishers and have done more than any other retailer to enable the indie explosion.

However, since it is such a giant part of the market you have to do things just right to get and keep any momentum whatsoever. The indie explosion there is also an indie glut. You’re shouting into a storm (ba-dum-ching) to be heard. So, I’ve got a few tricks up my sleeve which may or may not work to help Pilgrim of the Storm have a super successful launch on that site.

With Crimson Son, I tried the traditional approach – promoting several months out, blog tours, signings, earlier cover reveals, you name it I did it. By most standards, it was a moderately successful indie release which cost me more marketing dollars than I wanted it to.

For Pilgrim of the Storm, I’m fighting leaner and meaner. I’m trying to set up opportunities which I know worked for me in the past. I’m also trying to navigate Amazon’s ever-changing rules on what makes an author pick up -and keep- any steam on their site.

Finally, I want to try and figure out how these other markets work. While I love Amazon, it bothers me that, as a business, everything I have is tied to their distribution channels. It’s only smart to diversify.

So, if you absolutely need to buy my book from Amazon, you’ll need to pre-order or wait a few months. Of course, if you were already on the mailing list, you might check your inbox. I’ve taken another page from retailers and started Christmas early…