Famous Last Words from the Ass-End of the Universe 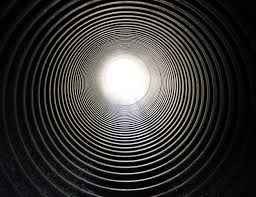 Light or sphincter? You decide…

There is a light at the end of this tunnel. I think.

It could be the place where the singularity collapses and I get playdoh-extruded out of the universe’s sphincter. Not sure. I just gotta get there first.

My publishing schedule for this year is nigh insanity. Empty Quiver is back from the editor and since this is a sort of experimental anthology, I want to try my hand at formatting.  I used to layout magazines and newspapers, so how hard can it be? (#FLW…)

And then I’ll just follow that up with two more books. No problem. They’re mostly written…

It has become clear in the editing stages of First Song, that this may indeed be a trilogy. Based on some insightful developmental crits from the North Branch Writers, I decided I needed an entirely new starting point for the novel. Turns out, starting a fantasy novel medias res may lead to confusion, disorientation, and severe stomach cramps.

About 8000 words later, the setup for this world is more clear, my protagonist’s motivations better spelled out, and overall I have a stronger setup. Strong enough it even suggests a better stopping point for the first book. Which rearranges book two. And might imply a book three…

This is quite possibly Sam’s fault.

With ambitious plans come necessary sacrifices. You may have noticed (or you will if the sidebar calendar will ever update) that I had to cancel my Comicpalooza appearance at the end of May. I enjoy geeking out with others and attending or even sitting on panels, and I was stoked to be invited. But right now, I need to be putting words on the page.

Conventions are amazing opportunities to network and meet new fans, but I have to run my fledgling publishing empire on a tight budget. With three books coming and wanting to maintain the professional standards I set with Crimson Son, I need every spare penny invested in their production. Once all this is over, I might head back to the con circuit.

I’ve got another book buzzing around in my brain which I HAVE TO IGNORE… LA LA LA LA LA LA – I CAN’T HEAR YOU…or risked being derailed on my current projects. And after that, I’m positive that on my trip through the ass-end of the universe, I’ll see something cool that sparks a new idea or three.

We’ll see. I may become a digital hermit sooner rather than later. Though…I suppose that’s not possible. Everyone knows where to find me.

Hang on. Let me adjust this plug on my router…