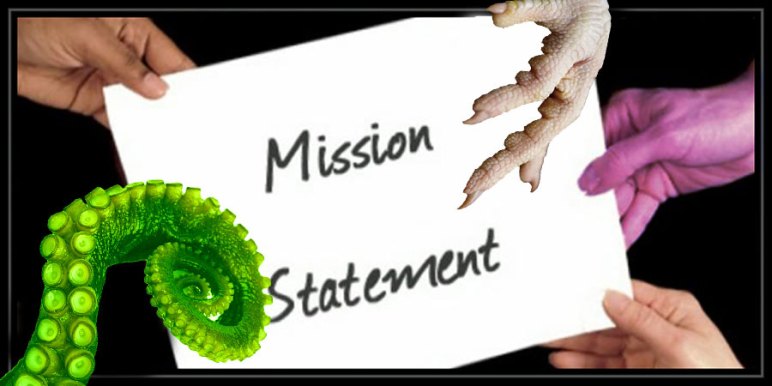 Clears that right up, eh?

Of course, these two things aren’t mutually exclusive. You can fiddle with the dials and focus on both to varying degrees. Much like genre labels, the real dividing lines can get fuzzy.

Okay, so, what is the point of all this needless literary gobbledygook, Russ? Glad you asked. A year into this writing adventure and I’m discovering things about myself along the way. I’m modifying how I approach writing and also how I reach out to potential readers. Part of this includes revisiting my mission statement on a regular basis. The old one read like this:

Russ creates character-driven speculative fiction. His stories drip with blood, magic, and radioactive bugs. He writes for adults who are young at heart and youngsters who are old souls.

The new statement is more focused. I’ve pinpointed the genre and I’m letting people know what kind of characters I like to write about.

Russ creates character-driven fantasy about unlikely heroes. He writes for adults who are young at heart and youngsters who are old souls.

Plot-driven books are fun but I like to complicate pretty much everything I touch. And while webs of plot intrigue can get pretty thick, there ain’t nothing more complex and interesting to me than the inside of somebody’s head.

At the heart of it, Crimson Son is a story about a kid trying to grapple with some serious family issues. To do that he’s got to put on his Dad’s overly large boots and play hero. Rarely does he get the “hero” part right and at times only sheer luck keeps him alive. The external plot finds him as often as he finds it, but the real action is in the changes his character undergoes as he grapples with loss, PTSD, and escaping his father’s shadow.

There’s even a subplot in Crimson Son which is the tragic tale of the Black Beetle. In the Beetle’s mind, he’s the hero who just saved the world an awful lot of trouble and he’s simply trying to move on (and to really blow your mind, read Empty Quiver and ask yourself if he isn’t the hero…) Yet he ends up failing to escape not only his own machinations but also the surprisingly effective efforts of a scrawny, reckless smart ass who is hell-bent on digging up the past.

Sure, plot happens and hopefully entertains. However, the true driver of the story is the confluence of all these characters over the common themes of family and the nature of heroism.

The external crisis is averted in the end, but more importantly Spencer has developed. He’s dealt with loss. He’s realized his Dad is an immutable force – the living superhero who can only see the world in certain shades (though there is a tiny spark of potential change). He’s also verified the superhero gig isn’t his thing. He figures out the value of being, well, Spencer. He wants his own life. Freedom becomes more than just escaping the bunker he’d been holed-up in.

Because I find run-of-the-mill heroes boring. In truth, run-of-the-mill hero stories usually trend more towards plot-driven. Not that typical heroes can’t have strong internal development but the more trope-ish the protagonist, the less depth you have to work with. That and awkward, imperfect (re. normal) people (re. humanoids) intrigue me.

On the genre spectrum I’ve seen Crimson Son shelved under everything from Science Fiction to Fantasy to Action / Adventure and even Young Adult. But I’m firmly in the fantasy camp if I have any say in the matter. I prefer it because it helps me break rules or make new ones as I see fit. My next book is straight up traditional fantasy (in setting, maybe not in tone…).