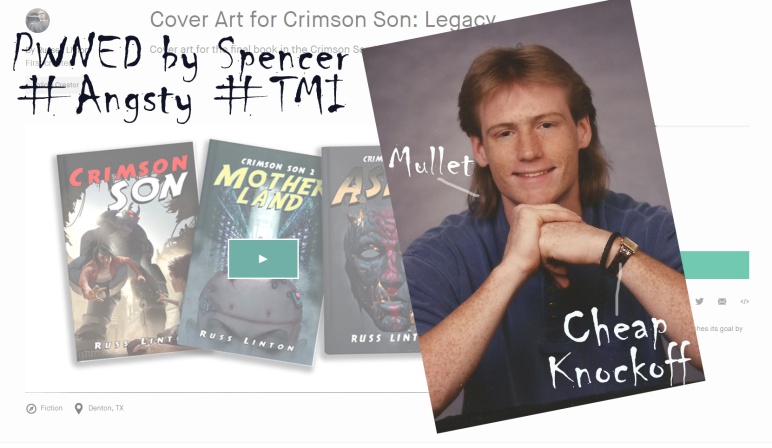 Not knowing a thing about crowdfunding, when I started this Kickstarter project, I had no clue what to expect. The outpouring of support has been nothing but inspirational and I want to again thank everyone that has contributed, shared, and even dropped by the Kickstarter page.

Spencer’s final book needs a fancy suit. Dad’s spandex isn’t an option. There are size differences and not only that, it would be creepy. Spencer doesn’t do creepy.

Creepy? No. I don’t do creepy.

Oh, hey. Spencer here. Look, I try to stay out of this Russ guy’s business. He wants to make a few bucks making my life public domain, fine. Ask me though, that’s the creepy stuff right there.

So, no, I don’t do creepy like some people.

Apparently though I may not be creepy, but there was some reviewer who said I was “angsty”. This reviewer, let’s call him Captain Obvious, probably has never spent two years in an icebox, his only human contact a stressed out, over-protective parent who might just decide to snap one day and end his genetic line with a flick of his super-powered finger.

It’s a family trait in some ways. Dad deals with it by beating the crap out of “bad guys”. I didn’t have that luxury. Well, not until that whole spin in the Black Beetle suit…

He’s convinced he’s in cardiac arrest. Most likely, he probably has gas. But the point is, this freaking crowdfunding thing is getting WAY too close for comfort. He’s huffing into a Chinese takeout bag right now. I’m not sure if that’s aromatherapy or if he’s attempting to control his breathing.

So what this Russ guy means to say is SHOW ME THE MONEY people! I know you’ve been reading all about me, keeping yourselves entertained with my misadventures. Whatever, I’ve got bigger problems to deal with.

And those latest “misadventures”? They’re more hit than miss. Sure, things start rough. But by the end? I’m pretty sure I’ve made the old man proud – without having to wear his spandex.

While we’re on the topic of TMI about personal lives, and while I’m hijacking his systems, maybe I should share some of the creepy writer guy’s fondest memories…

There. Like, seriously. Is that a fucking mullet? Pffft. Write all you want about me dude.